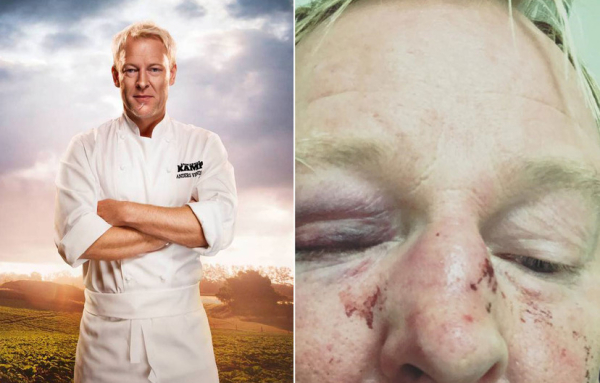 Anders Vendel, a famous anti-racist TV chef in Sweden, was “beaten up by three Muslim men“because they thought he looked like “Mr. Trump.”

Malmö police said “[Mr Vendel] was visiting a fast food restaurant and a stranger came up and started to hassle him.”

Vendel says: “I am in the emergency room as of a couple of hours ago awaiting X-rays. I was beaten up by three Muslim men between the ages of 25-35. They thought I bore a resemblance to Mr. Trump.”

“Two of the men grabbed my arms from behind and the third one started punching me all over the face. I tried to defend myself with my legs.”

“After about 20 fists to my face, I fell down to the floor. All three then started kicking me as much as they could in my face and head. I now have a broken nose, bumps, a clogged eye, mouth, lips and jaw. Even a broken right thumb,”

Before Sweden’s elite decided to start White genocide in Sweden, things like this did not happen.

After just 40 years of anti-White politics, Sweden has turned into hell on earth.

But times are changing, and people are finally starting to fight back.

White Genocide Sign of the times #5
To Be or Not to Be - White Genocide Mantra tune
BOOMER AWAKENING: Paul Craig Roberts Sits Up and Notices White Genocide
Black Politician calls for Whites to come back to South Africa
Watch out for White Genocide in Belarus! About 20,000 Chinese workers on their way.
Canadian Police suspected of covering-up White Genocide banner.