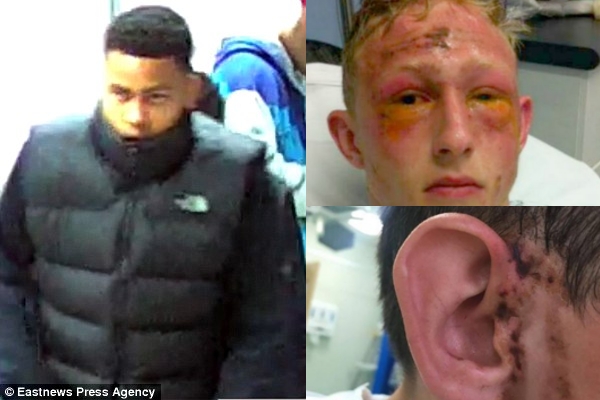 The five teenagers were waiting for a train in Ockendon station, Essex, England, on Sunday May 22.

When a train arrived, Bassey was already on it. He called over to the teenagers and tried to lure them onto the train, but they remained seated.

“When the victims refused, Bassey exited the train and approached the group whilst yelling abuse at them” said a spokesman for the British Transport Police.

One of the boys said “we don’t want any trouble“, but Bassey pulled out a bottle of industrial strength cleaner and squirted it over all five of them.

As the boys were screaming in agony and fearing for their lives, Bassey calmly went back onto the train and started laughing with his gang of about 20 friends.

As well as the psychological damage of the attack, one of the five teenagers was blinded in one eye, and another had the taste buds on his tongue corroded away.

This Brown-on-White hate crime has not received the kind of international attention that a White-on-Black one does.

The mainstream media ignores these kinds of attacks because they want us to believe that White people are evil. Why would they want that? It’s because they want to get rid of White societies, and painting us as the devil and getting us to hate ourselves makes it easier for them.

Why would they want to get rid of White areas? Now that, I can’t answer. All I know is that this . . . whatever it is they are trying to do . . . is legally defined as genocide of White people.

Before you tell me it’s not genocide, Google the UN genocide conventions and you’ll realize genocide is simply the deliberate and targeted elimination of a group of people. The methods don’t matter.

Congressman questions FBI about “#WhiteGenocide” hashtag
Watch out for White Genocide in Belarus! About 20,000 Chinese workers on their way.
Canada: White Students Turned Away from “Anti-Racism” Seminar for Being White
German Mayor calls for more immigrants.
French Ex-President Sarkozy again tells French to mix races.
Unarmed White teen shot dead by cops – but no one cares?