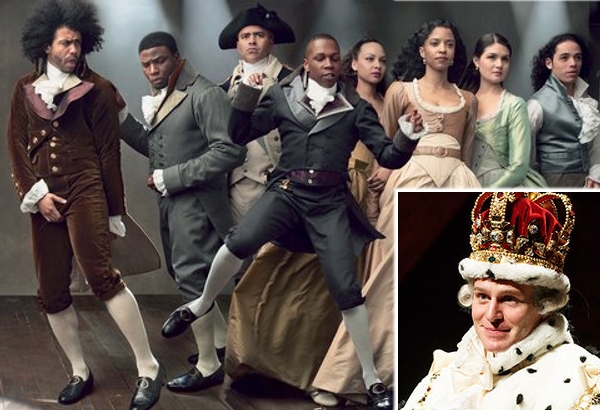 Hamilton’, Lin-Manuel Miranda’s musical about the life of Alexander Hamilton, one of America’s founding fathers, is being performed on Broadway.

You know it’s going to have political undertones, when you read that the first act is titled: “Immigrants : We get the job done!”

In fact the only White leading actor is King George III, which American audiences identify as the bad guy.

When the musical was first performed in 2013, it even had a Black guy playing King George III as well, but I guess they had to cast the bad guy as a White man or else the musical would be deemed to be some kind of evil ‘hate musical’, and would never make it on Broadway.

Anti-Whites have re-written a lot of history, all to make White people look like some kind of super-evil Nazi race which caused all of the world’s problems.

If you have a kid in school and asked them what they learned in school today, they’d probably tell you exactly that.

So why are they re-writing history to make us hate or feel guilty about being White?

The simple answer is: because they want to get rid of us. The anti-Whites opened up America’s, Australia’s, Canada’s, and Europe’s borders to mass non-White immigration with their militant lobbying.

This musical is yet more proof that “diversity” is White genocide!

Islamic state has a dirty bomb. But what about a diversity bomb?
Swedish police sent to defend immigrants who got away with gang-raping woman in a wheelchair
Mirror Article Reports on our #WhiteGenocide Billboard in AR
Overwhelming majority of Italians say no to “refugees”
Metropolitan Police to be the “Minority Police”–UK Police force “too White”
Anti-White Lord paying to fly immigrants to Poland.

This Week In #WhiteGenocide 6

Romanians will use violence to stop the very first immigrant camps being bu...
Scroll to top