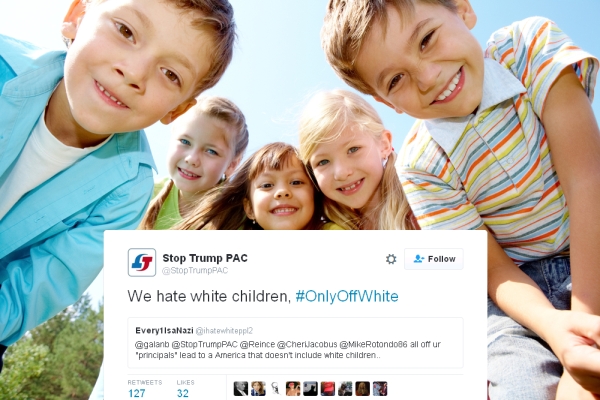 The “Stop Donald Trump Public Action Committee“, a group which opposes the Presidency of Donald Trump has Tweeted “We hate White children #OnlyOffWhite.“

They were responding to a Tweet which said “all off ur ‘principals’ lead to a America that doesn’t include white children..”

Responses to their Tweet have ranged from agreement to calling the group anti-White.

Of course they hate White children. Children are the future, and they don’t want the future to have White people in it.

This may sound eye-rollingly over the top, but actually, the legal definition of genocide states that genocide is nothing more than an agenda to get rid of a group. In short, it does not have to be violent or involve rounding people into camps.

The anti-White elite hope to eliminate White areas with “diversity”. That fits the definition of genocide.

They Sleep, We Live US Secretary of State: ignore 9/11, prepare for “borderless world”
Scroll to top