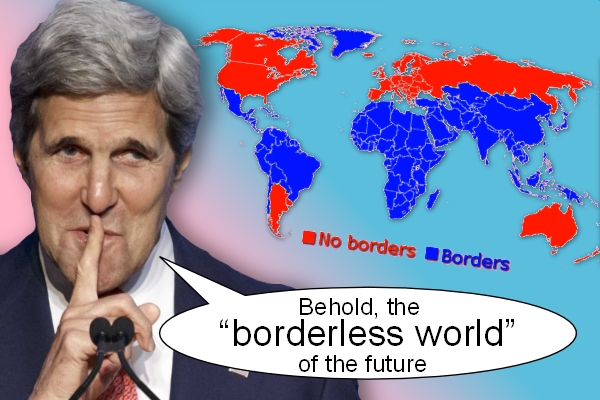 The US Secretary of State, John Kerry told a room full of Northeastern University graduate students that an open borders policy was not responsible for 9/11, and they should accept the destruction of the country’s borders.

“Many of you were in elementary school when you learned the toughest lesson of all on 9/11,” he said.

“There are no walls big enough to stop people from anywhere, tens of thousands of miles away, who are determined to take their own lives while they target others.”

“So I think that everything that we’ve lived and learn tells us that we will never come out on top if we accept advice from sound-bite salesmen and carnival barkers who pretend the most powerful country on Earth can remain great by looking inward,”

“And hiding behind walls at a time that technology has made that impossible to do and unwise to even attempt.” (*Ahem* In other news, India has installed a laser border fence.)

“For some people, that is all they need simply to climb under the sheets, close their eyes and push the world away,”

“And shockingly, we even see this attitude from some [Donald Trump] who think they ought to be entrusted with the job of managing international affairs.”

“The future demands from us something more than a nostalgia for some rose-tinted version of the past that did not really exist in any case,”

“You’re about to graduate into a complex and borderless world.”

We hear all these politicians talking about this “open borders” mumbo-jumbo, but you’ll never hear them calling for open borders in Africa, Asia, Central America, the Middle East.

All this “open borders” stuff is only talked about for majority White countries. You see, all those Black, and Brown immigrants are here to “diversify” all your horrible White neighborhoods and enrich them!

Gee, anyone would think that “diversity” actually means “not White”. Well that’s because it is – it’s a more cryptic and hidden way of calling for the destruction of White majorities (legally defined as White genocide.)

Africa for Africans, Asia for Asians, White Countries for Everybody

This Week In #WhiteGenocide – 11

Students for Bob Whitaker for President in 2020 ask Princeton: “Are Tibetans who protest their genocide ‘Tibetan Supremacists’”?

This Week In #WhiteGenocide – 15