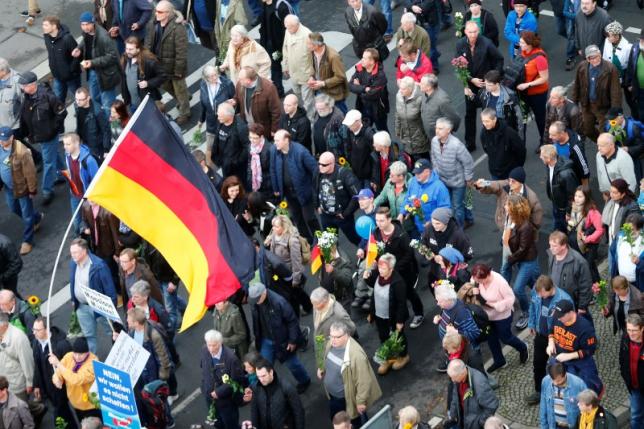 Supporters of the right-wing Alternative for Germany (AfD) demonstrate against the German government’s new policy for migrants in Berlin, Germany, November 7, 2015. REUTERS/Hannibal Hanschke

In the Germany city of Dusseldorf, a group called “Dusseldorf is Watching“ has seen a huge spike in online membership, despite having just been founded on January the 6th.

It now has nearly 8,500 people who are prepared to “protect our ladies” from the immigrant sex assault wave seen in Cologne and other European cities on New Year’s Eve.

The men, who the Cologne Chief of Police described of “Arab or North African” origin, attacked women in large groups; groping, assaulting, and raping them.

“Dusseldorf is Watching” intends to protect women by patrolling through the city on weekends and public events. The group founder said it is non-violent and is there to be “present and attentive.”

The group said it is “not political” but that it’s “all about to make our city safer for our ladies.”

The first meeting is to be organized for Saturday the 9th.

German police, as would be expected, are not happy at all with this group.

“For public security in Germany the police are responsible… deliberately searching for offenders is not a job for the citizen” said a spokesman for Dusseldorf police.

Yes, for several months now, Germans have been receiving fines and prison sentences for saying things the government does not agree with on Facebook.

Writing things like “Filth out!” can get you five months probation, like it has done for one woman.

First they legally open our borders and we tell them “no!”

Then they illegally open our borders and again we tell them “no!”

And now they are trying to make it illegal for us to say “no!”

This is White Genocide and the anti-Whites behind it, like Angela Merkel, are sick and pig-headed.

Eritrean “refugee” moves in with Swedish family, he slashes 7 year-old girls... Huge riot in German nightclub after 500 immigrants break in and grope women
Scroll to top