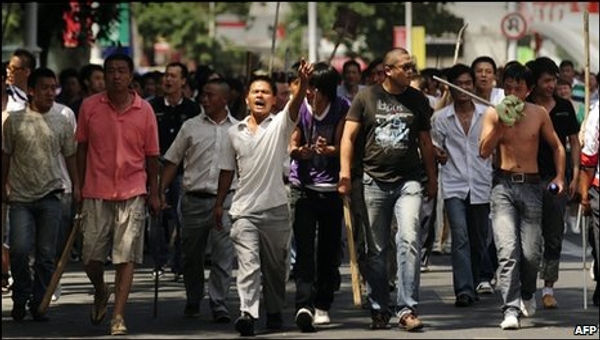 Italian police in the town of Prato, Tuscany, have arrested Chinese business racketeers who have been waging a race war on Arab and North African illegal immigrants.

Members from “the City of the White Stag“, a Chinese “cultural” group, have apparently been forming vigilante patrols and attacking any Arabs and North Africans they see.

In addition to vigilante patrols, on June 29th, there was a riot between Chinese and Italian police.

On July 1st, Italian police carried out raids on the Chinese gangsters who were suspected of attacking Arabs for suspected criminal activities and racially motivated violence.

The town of Prato has the second largest amount of Chinese in Italy, with about 16,000 first-generation Chinese immigrants, and an estimated 50,000 ethnic Chinese in total. That’s 1 out of every 4 people living in the town.

Before you question why there would be a war between Chinese and Arabs being waged in Italy, of all places, remember that this is the new and improved multiracial Italy.

You see, Italians may have given the world the Roman empire, classical civilization, and many things like that, but they are “too White”. And according to our color blind establishment, being “too White” is a sin.

This is what happens when a society tries to become, or is forced to become multiracial. The country turns into a no-man’s land, where groups fight for control.

However, this did not spring about naturally. After WW2, Western governments opened up our borders to massive non-Western immigration (without asking the people they are supposed to represent), and it continues to this day – and still against our will.

This agenda is just White genocide, because open borders are only forced on White places, and it’s intended to get rid of us.

No other group on earth will see its countries “diversified” in the way the West is. It is a deliberate agenda to get rid of us.