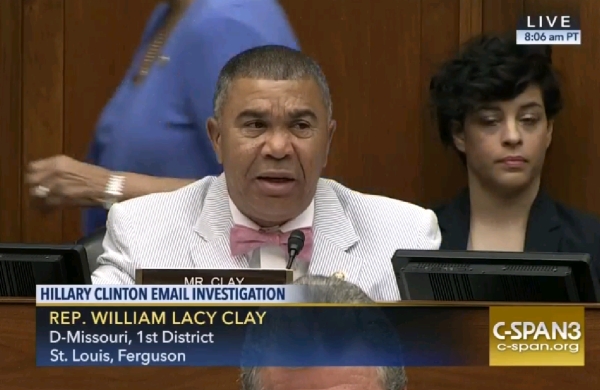 William Lacy Clay, Congressman for Missouri’s First District, has asked the director of the FBI if the “#WhiteGenocide” hashtag is becoming too popular.

“Some of these organizations seem relatively harmless, but others appear to be very dangerous and growing” said Clay.

“In your experience, how dangerous are these groups and have they incited violence in the past?”

The Director of the FBI said it was hard to answer such an abstract question, so Clay asked a more specific one.

“Okay, let me ask about a more direct question. A gentleman named Andrew Anglin is the editor of a website called the Daily Stormer that is dedicated to the supremacy of the White race as well as attacking Jews, Muslims, and others.”

“The website features numerous posts with the hashtag #WhiteGenocide, to protest what they contend is an effort to eliminate the White race. Are you familiar with this movement?“

“Well this hashtag has been promoted all over social media by a growing number of White supremacists. For example one Nazi sympathizer Tweeted repeatedly using the handle @WhiteGenocideTM.”

“One of my biggest concerns is that certain public figures are actually promoting these dangerous groups even further, and as you may know one of our most vocal candidates for president retweeted @WhiteGenocideTM.”

You heard that right, folks, a congressman is afraid of an internet hashtag!

He says we are “dangerous”. That’s right, we are very dangerous people. We are dangerous (to them) because we tell the truth.

It’s easy to take down liars, because you can just expose them. The only thing you can do to stop the truth is to silence those who speak it.

What we see is a “diversity” agenda being used to eliminate White people from America, Canada, Australia, and Europe.

This is White genocide and the anti-Whites know full well that is what they demand. The only thing they disagree with is calling it “genocide”. They would rather call it some nice name to deceive people.