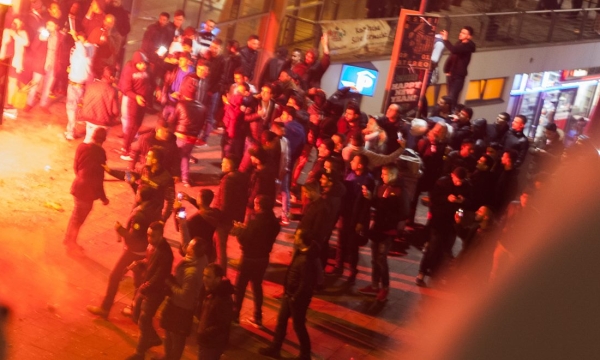 More news is coming out of Germany about the New Year’s Eve sex assault wave committed by “Arab or North African” men, despite German media trying to censor the events.

Die Welt reports that the “Elephant club“, a nightclub in the city of Bielefeld, was attacked by an organized mob of about 500 immigrant men.

Nightclub bouncers phoned the police when the mob became aggressive and started throwing fireworks, but before the police could arrive, the mob broke into the nightclub and then started to grope the groins and chests of female visitors.

One of the men who stopped the mob of immigrants from groping said “Only by using physical violence, we could help women to break free.”

When police arrived a full-blown riot had broken out.

A police spokesman said the “aggressiveness of the men involved in relation to the security services was considerable.”

Rioting had been reported in the city, but German mass media had tried to cover up the extent of the riots, and the reason why they broke out.

An anonymous member of the EU’s security organizations criticized how this is being ignored by politicians.

“Nobody will admit Brussels policy is inherently linked to what happened in Cologne – they will not welcome such a link” he said.

The people in charge of the EU have been trying to “diversify” Europe with all these Arab and African immigrants. For some reason they want to get rid of Europe’s White majority.

Everyone has their own ideas as to why they would want to do this, but the one thing we can say conclusively, is that their agenda is in breach of the UN genocide conventions – it is White genocide, and “diversity” or “multiculturalism” are the just code words they use to carry out this agenda.