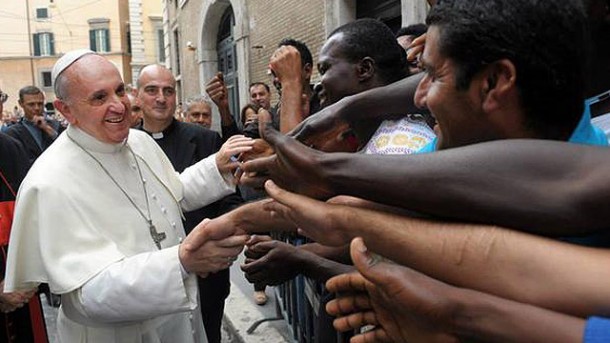 So according to Pope Francis “Europe is like Sara,” the non-child bearing wife of Abraham, “which first gets scared but then smiles secretly” and he said that “in the end, Europe will smile to migrants.”

“Europe must and can change. It can and must reform itself. If it is unable to financially help the countries of origin of refugees, you must face the problem of how to address this great challenge that is primarily humanitarian, but not all.”

But the thing is, when he says “Europe” he’s not talking about Vatican city – the micro-country he lives in. Vatican city has only taken in two “refugee” families. There are many parks which could be converted into “refugee” camps. So why has this not even been proposed? Why are there no refugee camps next to the Vatican?

What’s even more interesting is that in September 2015, an Arab journalist posed as a Syrian “refugee”, then asked priests and Vatican city officials to give him help, only to be sent away on all occasions.

And this is after the Pope called on “every parish, every religious community, every monastery, every sanctuary of Europe” to take in at least one immigrant family.

Is it me or does this smell a bit like hypocrisy? Well, maybe I do smell . . . but the hypocrisy is nose-burningly bad.

The EU leaders, big business leaders, “anti-racists”, and etc are all pushing this on us suckers, but they don’t even have the integrity to live in one of these “diverse” areas that they whined for.

Their “diversity” agenda is just a codeword for White genocide.

Save emails for next administration to prosecute WHITE GENOCIDE criminals

To Be or Not to Be - White Genocide Mantra tune

This Week In White Genocide - #2 - DIEversity Round Table

Germany wants to unload Arab immigrants on Ireland, so Merkel’s party can... Bulgarian superman captures over 20 illegal immigrants with just his bare h...
Scroll to top