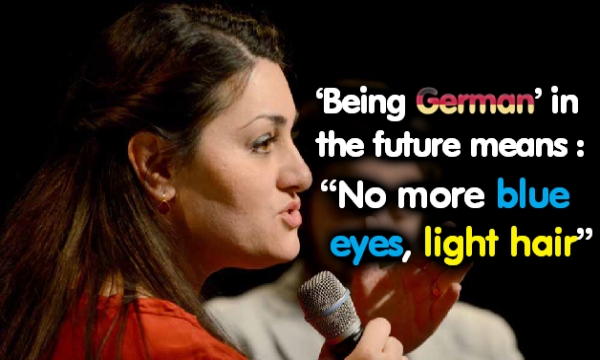 Lamya Kaddor, a German-born Syrian woman and scholar of Islamic studies, was applauded on TV for calling for a future with no more native White Germans alive.

“I think that we have to be aware that we are a country of immigrants” she said.

“‘Being German’ will mean having a migration background in the future.”

“This is what being German will mean in the future! No more blue eyes, light hair and claiming ‘we’re all German’!”

“Being German also means wearing a Hijab [and] having dark hair. This is what being German means today!”

For predicting the total annihilation of native White Germans, she was given a round of applause by the audience.

This is by far one of the sickest crimes on the planet. The elite are trying to wipe out majority White societies with mass non-White immigration, or as they call it: “diversity.”

This is White genocide – an international crime – and it does not matter how many times they chant “diversity” like mindless drones.

“Diversity” is just their codeword for White genocide, because only White areas are targeted.

These bearded, grey-haired children are seeking refuge in Austria The Guardian – “Trump has to be the next president” he’s the “meanest,...
Scroll to top