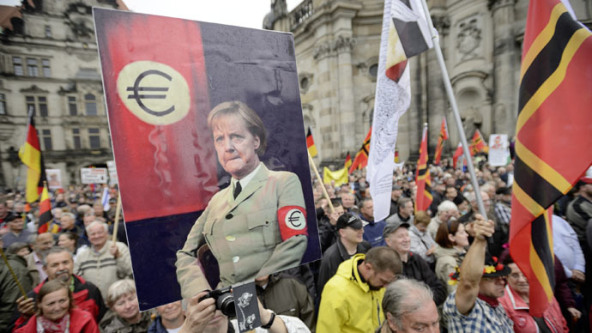 German Chancellor Angela Merkel has asked Mark Zuckerberg, the owner of Facebook, to stop Germans from making comments against mass immigration on Facebook.

In Germany, Facebook is now being patrolled by the Voluntary Self-Monitoring of Multimedia Service Providers, a government affiliated group which seeks out people who express “radical” opinions.

Their definition of “radical” seems to mean anything they don’t agree with. It can range anywhere from making threats, to simply talking negatively about immigrants.

(Whoops, radical old me – I have used the “i” word. We’re supposed to call them “newcomers” now.)

Merkel is still not happy – she has asked Zuckerberg at a UN summit in New York to do more to filter comments she disagrees with, so people cannot read them.

Facebook has agreed to carry out this mass censorship, and in future will be working with the Voluntary Self-Monitoring of Multimedia Service Providers.

At first she was screaming “racist” and “nazi” at them. For once, that didn’t work. Now she has moved on to legally censoring their opinions.

In case you didn’t know, Merkel wants Germany, and Europe as a whole to bring in as many non-White immigrants as possible in order to get rid of the White majority.

This is White Genocide because policies and laws have been put in place to make this happen. When there is a deliberate attempt to get rid of a group – no matter what the methods – it is always classed as genocide.

Recently, Merkel has said Europe should protect its borders. Do not be fooled – she still wants White Genocide, but she has been forced by a massive public backlash to bring an end to open borders.

“And for Europe, this means we of course need to, above all, protect our external borders across Europe – and protect them together – so that immigration to Europe is orderly,” she said.

“But it also means we must take on more responsibility for countries where the causes for people to flee are, or where there are a lot of refugees, such as in Lebanon, Jordan or Turkey,”

Red Ice Radio – Why Diversity is a Lie

This Week In #WhiteGenocide – 4 If You Thought We Were Joking, Just Ask France

Swedes ARE waking up.

Kevin MacDonald, Tim Murdock & John Friend – Invasion of Europe 120,000 illegal immigrants to be moved to Estonia, Luxembourg, and Sweden in...
Scroll to top