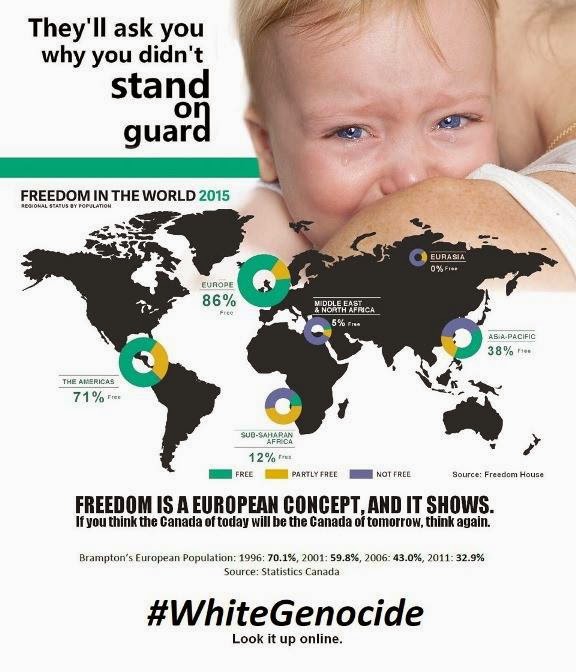 On Saturday, March 14, a number of immigration reformers leafleted several neighbourhoods in Brampton. The leaflet shown here called attention to the ethnic cleansing of Europeans. Brampton was first incorporated in 1853 and throughout almost its entire history, Brampton homed a 99 percent European majority. Even as late as 1996, Brampton’s European population stood at 70.1 percent. But soon after, in the blink of an eye in historic terms, Brampton saw a dramatic reduction in its European population, making up only 32.9 percent, as of 2011.

It should be noted that many Europeans have been leaving Brampton over the years. Although their exact reasons for leaving haven’t been documented by a credible source, it is safe to assume that this is the natural reaction of people not wanting to be a minority within their own community. Yet, despite this emigration of Europeans, Brampton held the 2nd highest city growth rate in Canada between 1996-2001, due entirely to massive immigration.

This is the third instance this year in which flyers criticizing immigration into this town have been distributed. And, of course, as in previous attempts to bring the issue of Brampton’s European genocide to the forefront, police action was threatened towards those responsible for the flyers, as this may be a possible “hate crime”. But is it really?

These radical changes were imposed by stealth. Canadians were never consulted. Canadians were never told what is now openly acknowledged that, with present high immigration levels (85 per cent from the Third World), the European founding/settler people will become a minority by 2050 in their own country.

The flyers also noted that much of the world is not free; indeed, the freest places are North America and Europe, exactly where most immigrants are NOT coming from. Furthermore, multiculturalism urges people to practice and retain their culture. Surely, as a population changes, so too will the values of the country.

Immigration and demographic changes would seem to be important issues. However, if you disagree with current political correctness, you’d better shut up. The political police are watching.

A headline in the Brampton Guardian labels the leaflet “racist”. The gall of the local scribbler named Nouman Khalil. Foreigners descend on another land en masse and radically change the makeup of a community. That’s okay. Object to your own people being overwhelmed and replaced, without an discussion or debate and you’re a racist!

The Guardian went on to report:

Peel Regional Police’s 22 Division Criminal Investigation Unit and its Diversity Relations Unit have initiated a joint inquiry to investigate the distribution as a possible hate crime.

So, the political police are investigating flyers expressing an opinion in a peaceful way. There is no “hate” here, just a dissent from current political correctness.

Actually, this is hardly the first time in which the establishment, when confronted with dissent, has called in the police. It happened when the flyers were first distributed back in April, and the police then concluded that it was not a hate crime. A few weeks ago, a woman sent out an e-mail objecting to a middle school in Sooke, BC flying the Red Chinese flag. A constable at the Sooke RCMP fired off a threatening e-mail to the woman:

Your e-mail regarding the Chinese flag being flown at Journey Middle School has been brought to our attention, and as such, a police file has been created. Please be aware that any threats towards the school will be taken very seriously and can be considered a hate crime if you threaten damage or harm to the staff or property of Journey Middle School.

The woman had made no threats of any sort. Creating a climate of fear and potential criminal charges seems to be the objective of these acts of intimidation.

“Diversity Relations Unit” — this is job description of the investigators! What does monitoring political expressions have to do with real policing? That unit should get the chop at the next police budget meeting.

The flyer warns about the city’s dwindling ‘European’ population and claiming the decrease is the result of a ‘White Genocide’. The leaflet titled ‘They’ll ask you why you didn’t stand on guard’ shows a crying baby with his mom superimposed on a world map, which presents a breakdown of ‘freedom in the world in 2015’ across the globe. The map claims to show the levels of freedom among world populations, dividing them into the categories of free, partly free and not free, declaring ‘Freedom is a European concept, and it shows — if you think the Canada of today will be the Canada of tomorrow, think again.’

So, who (if anyone), should really be up against persecution? If the police are really looking into conducting an investigation and possibly laying some charges, they should probably start with the political-elite and pro-immigration lobby groups who are encouraging these types of radical transformations to take place in every major urban center from coast to coast. Not only is what they are doing immoral, but it is also criminal! Under section 318 of the Canadian Criminal Code, it defines “advocating or promoting genocide as an indictable offence” and further defines “genocide” as follows:

deliberately inflicting on the group conditions of life calculated to bring about its physical destruction.

acts committed with intent to destroy in whole or in part any identifiable group.

In sub-section 4 of 318, “identifiable group” is defined as any section of the public distinguished by colour, race, religion, ethnic origin or sexual orientation.

Thus, judging from the government’s own statistics cited above and (of which some were used on this flyer), it can be argued that the promotion of mass immigration has had genocidal consequences against the founding European peoples of Brampton, and statistics will show a very similar trend happening in other major urban centres across Canada, with Toronto, Montreal, Mississauga and Vancouver ranked 1st through 4th in the total number of visible “minorities” as of 2006.

H.Avenger comments: When you move the conversation from “replacement” to the real issue of #WhiteGenocide. You get an electric response from all around.  We have seen this consistently since the begining.  And this electric response is exactly what is necessary to change the game permanently. Hats off to all those Canadian Activists!  Also of note is the obvious: “Diversity Relations Unit”.  Wonder how many of those we can find in Saudi Arabia or China?  Want to guess the answer?  Only White Countries need “Diversity Relations Units”.   Diversity is just a Code Word for #WhiteGenocide.

Red Ice Radio – Why Diversity is a Lie

US: Portland “too White” say Anti-Whites.