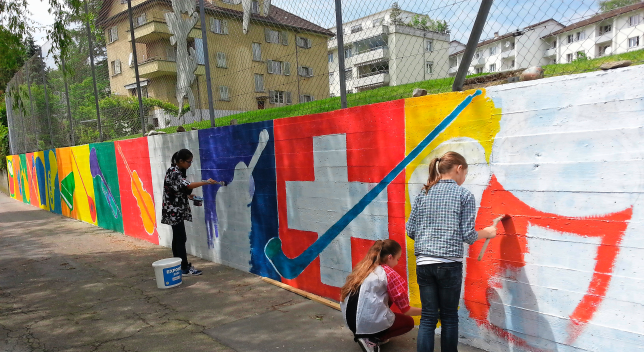 Children from a school in the city of Emmen, Switzerland, were asked to decorate a concrete wall by painting musical instruments on it.

“Some of the children had the idea to paint a Swiss flag with an alpenhorn,” said Peter Jans, one of the project organizers. Another student then painted a doubled-headed Albanian eagle.

The school has students from 28 different countries, and other children asked to paint their flag on the wall as well.

“Then other students turned with a request to the Executive Board, if they would also be able to show their flag there” said Emmen’s Communications Officer, Walter Bucher.

There was no room for all the flags, so Jans was asked to “stop the project, so as not to penalize students of other nationalities.”

One night, the Swiss flag painting was vandalized by someone who painted the white cross red.

“Why should the flag bother anybody?” said Ursula Vanderbroeck, who has two sons at the school. “The flag belongs to our country and is the identity of the people who live here.”

The mayor, Rolf Born agrees: “Personally, I see neither the Swiss cross or Albanian eagle on the school wall as a big problem.”

Things like this happen all the time, and still certain politicians insist that “diversity is our strength”.

I’ll tell you what “diversity” is: it’s a code word for White genocide.

No one is trying to “diversify” Africa, East Asia, South Asia, the Middle east, or Latin America. No one cares that these countries have closed border and do not have different groups living in their countries.

In politics, “diversity” is all about White people – getting rid of us that is. And that’s precisely why it’s White genocide.

White people must not be allowed to “escape” diversity says South African bishop
White GeNOcide quotes coming straight from the Top
When people call you names...
Yep....Anti-Racism is just a Code Word for #AntiWhite
Spain on Message!
The Devil went down to Georgia and found the White Genocide Mantra