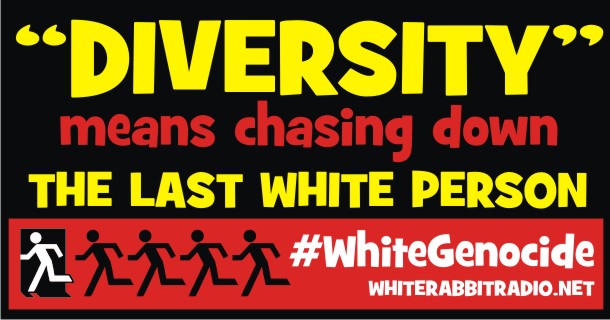 On Christmas Eve, an eminently smackable-looking self-described “actual communist” crouched down, grabbed his ankles, and shat the following Tweet upon planet Earth:

All I want for Christmas is White Genocide

The offending Tweeter was George Ciccariello-Maher, a professor of politics and global studies at Philadelphia’s Drexel University. He doubled down on Christmas Day:

To clarify: when the whites were massacred during the Haitian Revolution, that was a good thing indeed.

But in the midst of a backlash, he said he was just kidding because—haw!—there’s no such thing as white genocide:

On Christmas Eve, I sent a satirical tweet about an imaginary concept, ‘white genocide’…an idea invented by white supremacists and used to denounce everything from interracial relationships to multicultural policies….It is a figment of the racist imagination.

Ciccariello-Maher’s own words—in which he repeatedly takes a sadistic glee in the notion of violent white extinction—reveal he is absolutely full of shit. He wrote a 2014 paper called “‘So Much the Worse for the Whites’: Dialectics of the Haitian Revolution” in which he argues that the wholesale slaughter of Haiti’s white inhabitants was a righteous act leading toward “universal emancipation,” and we all know how well that all worked out for Haiti.

“Even though white people don’t exist, it’s a good thing that they’re dying out, and you’re a racist if you don’t understand that.”

In 2013, the mystifyingly employed professor stated “Yacub made a lot of white folks,” citing a brain-damaged theory of the Nation of Islam that an evil black professor created white people roughly 6,000 years ago.

In 2016 he wrote about an alleged conversation with his son, whom daddy has apparently brainwashed to the point where sonny-boy is talking about poisoning white people. Late in the year Ciccariello-Maher wrote about sending “Racist Crackers” to gulags.

Pardon me for noticing that it all sounds mighty genocidal, whitey.

Belching out the sort of logic-defying, obfuscatory nonsense that has been a hallmark of their flailing attempts at discourse for generations now, Ciccariello-Maher’s supporters claimed since there’s no such thing as “white people,” there could not possibly be anything such as “white genocide.”

Mind you, these are the same dolts who openly gloat that “White America Is Dying,” citing demographic trends they insist are inevitable.

So in other words, even though white people don’t exist, it’s a good thing that they’re dying out, and you’re a racist if you don’t understand that.
Part of the reason so many people snort and guffaw at the notion of white genocide is that the term “genocide” itself is generally understood as something that happens quickly, openly, and violently. It is not conceived as something that happens gradually as a result of deliberate demographic meddling by the powers that be.

But according to Raphael Lemkin, who is credited with coining the term “genocide” after World War II:

Genocide does not necessarily mean the immediate destruction of a nation….It is intended to signify a coordinated plan of different actions aiming at the destruction of essential foundations of the life of national groups, with the aim of annihilating the groups themselves….The objectives of such a plan would be the disintegration of the political and social institutions, of culture, language, national feelings, religion….

Proponents of the “white genocide” hypothesis claim that this is precisely what’s happening in Western countries—and only Western countries—through loose immigration policies and nonstop voodoo propaganda about the moral turpitude of not only white people—who, again, don’t really exist—but the very notion of whiteness.

They claim that the mass infusion of nonwhite populations into Europe and the United States—which has never been democratically approved of by any of the host populations and has instead been foisted upon them—violate this passage in 1948’s United Nations Convention on the Prevention and Punishment of the Crime of Genocide:

Deliberately inflicting on the group conditions of life calculated to bring about its physical destruction in whole or in part.

The howling double standard—i.e., the fact that no one is forcing Africa, Asia, or Israel to “diversify” while cramming diversity into every majority-white nation on earth—has led to Robert Whitaker’s famous phrase “Anti-racist is a code word for anti-white.”

Many point to an Austrian-Japanese man with the unwieldy name of Richard von Coudenhove-Kalergi as the original architect of white genocide. Kalergi established the Paneuropean Union in 1923, which many consider to be a precursor of the modern EU. In his 1925 book Practical Idealism, Kalergi wrote:

The man of the future will be of mixed race. Today’s races and classes will gradually disappear owing to the vanishing of space, time, and prejudice. The Eurasian-Negroid race of the future, similar in its appearance to the Ancient Egyptians, will replace the diversity of peoples with a diversity of individuals.

According to Kalergi, who was not Jewish but apparently a rabid philo-Semite, Europe’s Jews would comprise an aristocratic “leader-nation” and “spiritual nobility” for this harmoniously mongrelized new world order:

No wonder that this people, that escaped Ghetto-Prison, developed into a spiritual nobility of Europe. Therefore a gracious Providence provided Europe with a new race of nobility by the Grace of Spirit….It is the Jewish Socialist leaders who want to redeem us with the highest self-denial from the original sin of capitalism, free people from injustice, violence and serfdom and change the liberated world into an earthly paradise.

History shows that those who seek to establish an “earthly paradise” usually wind up creating hell on Earth.

Modern leftists—since they’re brainwashed zombies who’d rather eat a bullet than possibly admit that they’re wrong—dismiss all talk of “white genocide” as paranoid conspiracy-mongering by “racists,” an odious breed of exclusively white people who obviously need to be exterminated by all means necessary. While openly applauding the notion that whites are a “dying breed,” they will gaslight the living hell out of anyone who dares to notice that whites are a dying breed.

They will pretend not to notice that Bill Clinton said the “third great revolution of America” will be when the nation loses its “dominant European culture.” They will gloss right over the fact that Joseph Biden said that whites becoming a minority in America is “the source of our strength.” They’re probably not even aware that the suspiciously twinkly-eyed failed vice-presidential candidate Tim Kaine recently said that “Caucasians…have to put ourselves into situations where we are the minority.”

Ted Kennedy, the front man for the (cough) well-heeled globalist pro-immigration forces who pushed 1965’s Hart-Celler Act, assured the nation that anyone who thought the new law would disrupt America’s demographic balance was a paranoid loon.

From 1900 to 1960, America’s white population was almost unchanged at around 90%. It is now teetering around 60%. American whites are expected to reach official minority status sometime around 2040.

Smarmy neo-commie twerps such as George Ciccariello-Maher openly cheer such demographic decline while denying that it’s happening at all. That’s the behavior of either an insane person or an imbecile—possibly both.

They’ll continue laughing about the idea that it’s all been planned. And even allowing that it might not have been planned at all—that it all may be some giant catastrophe caused by nothing more than utopian delusions rather than ethnic malice toward indigenous Europeans—it all seems to be unfolding exactly as planned anyway.
H/T Takimag

Germany deporting Balkan immigrants to make room for Africans, Arabs, etc.
RawStory is a Joke
Flat White Reaction–Starbucks Not Enjoying Conversation About Race
UKIP Supporter calls it what it is: #WhiteGenocide
White Genocide Mantra in Spanish
The Guardian – “Trump has to be the next president” he’s the “meanest, Whitest, most vile bigot possible”

Drexel University Professor’s Christmas Wish: ‘All I Want for Christmas... Repost: The Bizarro World of Anti-Whites
Scroll to top