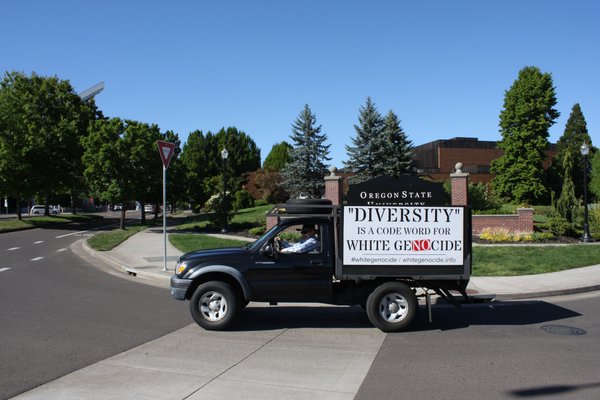 One way you can tell a really classy writer is her use of novel, creative terminology.

You can tell the writer of this title is a real pro who works hard to be original.

I have yet to see one single establishment article even mention the rioting at Trump rallies by anti-whites.

But sometimes when the right to peaceable assembly is violated, it is just plain evil:

The anti-white … stands up fearlessly for free assembly when it is used for anti-white causes:

“The permitted, lawful rally, put on by the Community Alliance of Lane County, Standing Up for Racial Justice and the NAACP as well as the Springfield Alliance for Equality and Respect outside Willamalane Center, was  “in reaction to increasing levels of racist, xenophobic, homophobic, Islamophobic, anti-Semitic and classist activity happening in Lane County,” the Community Alliance of Lane County said. “There have been more Confederate flags seen in the area, vandalism targeting Asian owned businesses, a truck driving around with neo-Nazi and white supremacist messages on it and more.”

With this innovative terminology the article shows the police moving in on this Giant Marr Thing and an arrest document showing that those same police who are absent when one or two pro-whites appear with signs saying “white genocide,” fearlessly show up in force when a dangerous giant like Marr threatens to stamp out real protesters really peaceably assembling to denounce whites.

Self-styled “professionals” who have NEVER ONCE mentioned free speech in relation to any violence against any pro-white show their dedication to American Principles when anti-whites protest in their own professional way:

And this article is pure hysteria.

No one but me will mention that.

No one but me will mention that and GET QUOTED.

They’re the names one hears discussed as pro-white “leaders.”

It is amazing that one small police department was able to restrain Jimmy the Giant. They did have a little support from “pro-white leaders,” THEIR chosen leaders, who knock down terms like “white genocide,” which in turn is a little too true and very descriptive of reality.

Reality has no place in today’s version of “peaceable assembly.”

“Peaceful assembly” does not cover heresy.

And anyone who fails to denounce statements that describe reality does not get quoted.

No matter what the heretical incident, there will be a picture that reflects media nostalgia for the Good Old Days, a photo will always be in the article with a picture of the good man, David Duke, who can be trusted to repeat the same old line that has pro-whites stuck in the mud.

Then a quote from another mainstay of the establishment, Jared Taylor (who can never understand that he is a mainstay) as Taylor denounces things like “white genocide,” things that go viral while he sticks with the same old line.

Lord bless them, but they are the idols of professional anti-whites.

They repeat the same old line and say, “This time it’s gonna WORK.”

A standard article in the establishment press: a writer goes hysterical and photos of Dave and a quote from good old Jared.

And the establishment’s loyal police force, protecting the rights of those who deserve protection.

And a public that will not recognize repetition until we point out that is IS repetition.

Swedes ARE waking up.

Another Elite calls for White Genocide

Swedish police sent to defend immigrants who got away with gang-raping woman...Students for Bob Whitaker for President in 2020 ask Princeton: “Are Tibetans...
Scroll to top