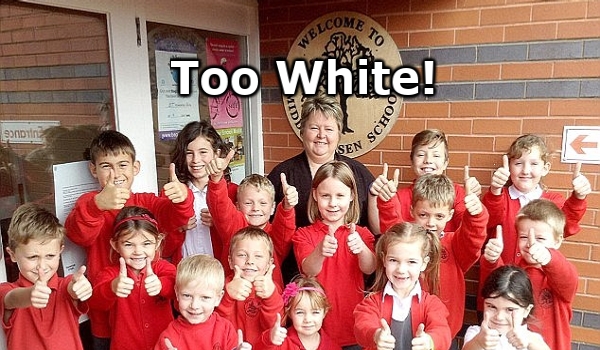 A school in the town of Market Rasen, Lincolnshire, England, has been downgraded because it didn’t have enough pictures of non-White people on the walls and didn’t preach about multiculturalism.

Ofsted, a government organization which inspects schools, is upset that the Town and Country Kiddies Nursery (Kindergarten) is primarily teaching kids about English culture.

The Ofsted report said that “[The School] Staff do not provide enough opportunities for children to develop a strong sense of belonging at the nursery and to learn about people who are different to themselves.”

The school was rated as “outstanding“, but now it has been downgraded to just “good.”

The town of Market Rasen is 97% White, and England and Wales is 86% White. So you can see why parents of children who attend the school have called it out as “politically correct nonsense.”

One anonymous mother said “Just because the majority of the kids are white shouldn’t be used as a stick to beat the nursery with.”

“The nursery does an excellent job, the atmosphere is inclusive and the staff break their backs to help every kid. This Ofsted report is a kick in the face for them and is yet another example of political correct nonsense.”

Clare Worrell, another mother said “I do not know one ethnic minority family in Market Rasen. How can the school be classed as not ethnically diverse when there’s no call for it?”

“There’s only White people around here. It’s a great nursery and they shouldn’t be penalised for this.”

In 2014, another English school in Lincolnshire was also downgraded because according to the Ofsted report, children were “not immersed daily with cultures you might find in a city-based environment.”

These ‘politically correct’ social justice warriors are just very petty people inside. They’ve literally got nothing better to do than complain about there being too many pictures of White people on a wall. Pathetic.

But if you want to understand where this political correctness agenda comes from, you have to go higher up than the middlemen.

The elite class (not necessarily the rich) have decided that being White is a sin, and that’s why many traditionally White countries have had their borders opened up to mass non-White immigration.

The rapefugee invasion of Europe is just the latest attempts at the elite trying to open the borders to all that lovely “diversity” (which they themselves refuse to live around).

Their goal is to get rid of majority White countries. Everyone has their own opinion of what this is, but according to the highest international laws, this is legally, a program of White genocide.

The people who support this are accessories to the White genocide agenda espoused by the elite.

Stop White Genocide activism on the streets of Latvia
Conservatives getting the message and are not backing down when the Anti-Whites start whining
White Genocide Sign of the Times #4
White Genocide Mantra in Spanish
European “migrant” crisis: A picture is worth a thousand words
Pope pushing Europe to open doors to 450,000 illegal immigrants

White evangelical couple think they’re better than you because they have black... There will be a massive White flight from Western Europe says Former US Dip...
Scroll to top