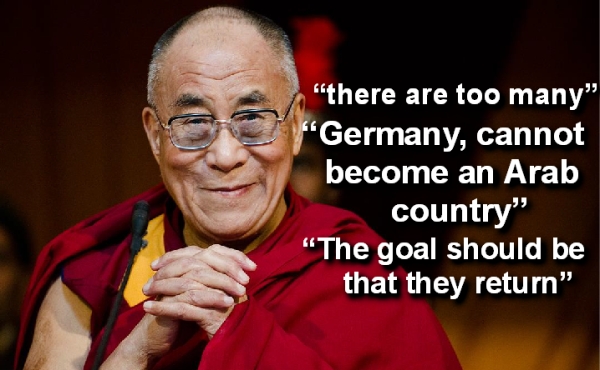 The Dalai Lama, the Tibetan spiritual leader of Buddhism said Europe must eventually send back “refugees” and cannot turn into an Arab continent.

“When we look into the face of every single refugee, especially the children and women, we can feel their suffering,” the Dalai Lama said in an interview for Frankfurter Allgemeine Zeitung, a German newspaper.

“A human being who is a bit more fortunate has the duty to help them. On the other hand, there are too many now,”

“There are so many that in practice it becomes difficult.”

“From a moral point of view too, I think that the refugees should only be admitted temporarily.”

“The goal should be that they return and help rebuild their countries.”

The Dalai Lama has called out the “unabated influx of Chinese immigrants to Tibet” a policy of genocide, because it was “reducing the Tibetans to an insignificant minority in their own country.”

The same thing is happening in Western countries full of White people. The people in powerful and influential positions demand that we have open borders, so we can create “diversity”.

Of course, in order to create this “diversity” all the White areas must be destroyed in the process.

Well, that is not “diversity” or “multiculturalism” or whatever the hell you want to call it. That is White genocide.

The Dalai Lama wants to stop the genocide of Tibetans and he is praised as a great man.

Me, and many more like me, want to stop the genocide of White people in our own countries and South Africa, and what happens? I am branded an “evil-nazi-who-wants-to-kill-all-the-jews”.

These anti-Whites have got nothing but horrible words. “Diversity” is White genocide.

Swedish family forced from their home. Government says it’s for immigrants...Minister: Non-Westerners were brought in to “diversify” Germany
Scroll to top