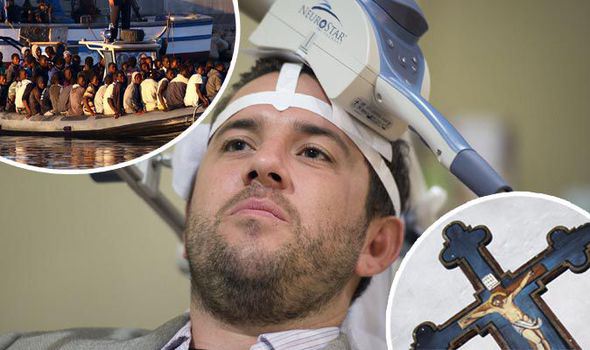 Researchers at the University of York, Britain, and the University of California, Los Angeles, have used transcranial magnetic stimulation (TMS) to suppress what they describe as the “threat-response functions” of the human brain.

“We think that hearing criticisms of your group’s values, perhaps especially from a person you perceive as an outsider, is processed as an ideological sort of threat,” said Dr. Keise Izuma.

“One way to respond to such threats is to ‘double down’ on your group values, increasing your investment in them and reacting more negatively to the critic.”

“When we disrupted the brain region that usually helps detect and respond to threats, we saw a less negative, less ideologically motivated reaction to the critical author and his opinions,”

American participants were given two fictional essays written by immigrants to read. One was positive of America, and the other was critical.

When the participants’ brains were altered with magnetic energy, they were then given the same essays to read again.

The researchers found that there was a 28.5% increase in positive feelings towards the immigrant who criticized America.

“These findings are very striking, and consistent with the idea that brain mechanisms that evolved for relatively basic threat-response functions are repurposed to also produce ideological reactions,”

This experiment also tested to see if magnetic energy would change people’s’ religious opinions as well.

“We decided to remind people of death because previous research has shown that people turn to religion for comfort in the face of death.”

“As expected, we found that when we experimentally turned down the posterior medial frontal cortex, people were less inclined to reach for comforting religious ideas despite having been reminded of death,”

The experiment found that magnetic energy had made the participants 32.8% (one-third) less likely to believe in God, angels or heaven.

Before 1960, this research even have been necessary. Post 1960, the borders of majority White countries were opened upon one by one, and now they have the highest percentage of immigrants they have ever had in their history.

And if anti-Whites get their way, it is going to keep rising. We are living in a bizarre time, where the political elite want to get rid of White people.

If you think about it, the only reason why we have open borders and forced “diversity” policies in White areas, is because anti-Whites have an objective: White Genocide.

Young Germans should be forced to “service” immigrants for 1 year, says politician
Eritrean “refugee” moves in with Swedish family, he slashes 7 year-old girls throat
Sign of the times spotted in Alabama!
Tram Lady finds out that Anti-racism = Anti-white
German photographer gets arrested, put on trial, for entering Europe illegally with other illegal immigrants
Canada: White Students Turned Away from “Anti-Racism” Seminar for Being White