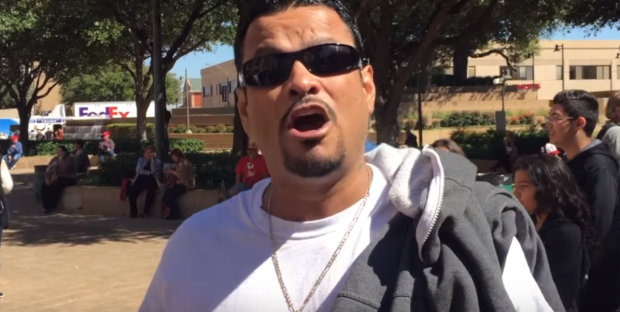 “If these people get what they want, Trump in there, I guarantee you — you think the Mexicans are going to lay down that easily? We don’t ever say nothing,” said Ronald Gonzales, a resident of Dallas, Texas.

Gonzales was part of a small group protesting against a Donald Trump rally in Fort Worth.

“What do you think? You think the Hispanics are going to sit back and let these people come and take our parents away?”

“I’ve never called y’all crackers or nothing like that until this time, y’all call us Mexicans, spics and all that.”

What we have here is a perfect example of why “multicultural” societies don’t work, and usually split into several countries.

A country is a similar group of people. Texas, California, and all the other states which have allowed mass Hispanic immigration are no longer American. They are Mexican.

Unfortunately, the Western elite are total fools who religiously force “diversity” on White suburbs. What they are doing is legally classified as White genocide, and their agenda may end up splitting America into different countries (and most other White Western countries as well.)

The Resistance to White Genocide is Made Up of Phantoms

The refugees no one wantsPope pushing Europe to open doors to 450,000 illegal immigrants
Scroll to top