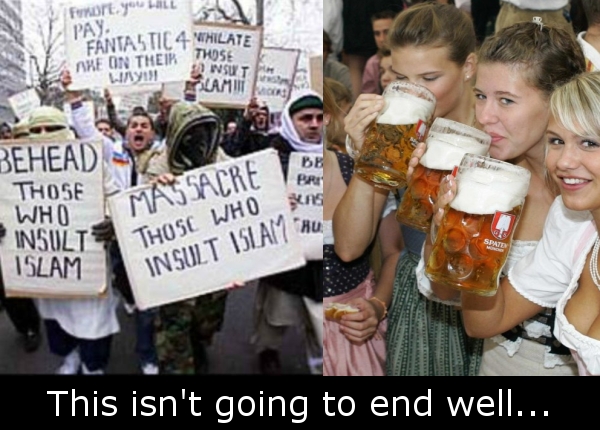 Even before Angela Merkel flooded Germany with Arab immigrants, there were lots of Turks living in German cities who chose to live among other Turks and form Turkish areas.

Since taking in over 1.5 million Arabs from 2014, German citizens are starting to fear for the future of their country, as Muslim groups claim the banning of alcohol in Germany will stop sex attacks by foreigners.

Now that German cities have been colossally devastated, Karl-Friedrich Thoene, a member of Thuringia’s ministry of infrastructure and agriculture, says that German towns and villages should be turned into an “integration laboratory“, where German people are the test subjects.

“The rural regions are a laboratory of integration,” he said, “there can be no parallel societies in rural areas.”

“The village community is the ideal chance for integration.”

Thoene said that “we need incentives to persuade the migrants to stay [in rural areas].”

Gudrun Kirchhoff, from the German Institute of Urban Affairs, agreed with Thoene’s plan, saying that lower cost of living, cheaper rents and tight-knit communities are “factors of success“.

The anti-White elite say that we need immigration because we have a low birth rate and will not have enough workers. This is a lie.

Western countries do not need low-skilled labor, because by around 2030, an estimated 50% of all today’s workers will be replaced by robots; especially low-skilled jobs.

So why does Germany REALLY need to bring in millions of non-German Arabs and Africans, and then “integrate” them?

The elite is anti-White, and for some reason, they want to turn White areas into minority White areas.

They call it “diversity”, but they are only targeting White areas. “Diversity” is actually their code word for White genocide.

What they are doing is the crime of genocide. If Black areas were targeted for mass non-Black immigration, all because they were labelled “too Black” – that would also be genocide.

Well, this is White genocide – and it’s wrong.

Swedish media attack brave 15 year-old who was killed by “Arab” for stopping...Up to 4 million immigrants expected to storm Europe this spring – UN wants...
Scroll to top