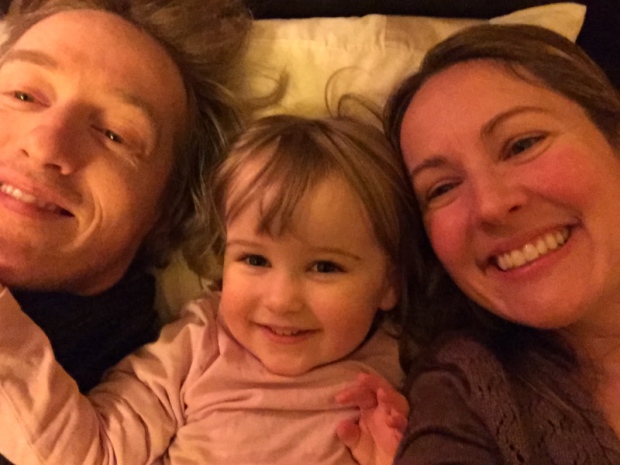 The UK Home Office, in charge of immigration, is again showing its anti-White bias by deporting an American mother who started a family with an English man.

English-born Dominic James and his American-born wife Katy have a two year-old daughter who was born in Eastbourne, England.

Katy has lived and worked in Britain since 2003, and has never claim benefits (welfare). The couple have been married for nine years, but she has been separated from her baby daughter after the Home Office deported her back to the US, because the family temporarily moved there in 2009.

Dominic James said “We recently applied for a visa, requesting the Home Office to consider an application for my wife to remain in the UK. We included 15 letters of support, including personal messages from close friends, our doctor, our daughter Madeline’s nursery, our parish priest and bank manager.”

“Our family wrote the stories of how my grandfathers fought and died in the wars for our country, to secure the freedom of their future generations. But it was all to no avail: the Home Office says that my wife can return to the US on her own, leaving me to look after our daughter without her mother.”

“They refused our application on the grounds that breaking a family apart is a reasonable and justifiable decision, even though Madeline’s life will be broken apart.”

“I rue the day I decided to try life in America for a temporary period in 2009 as I had no idea that the UK government would close the door on us and deny us the right to return. All of us who find ourselves unable to live here with our non-EU spouses never expected it; a betrayal of our rights as British citizens, locked out of our own country, exiled for the mistakes made by previous immigration policies.”

“Our life has been on hold since we applied. Their verdict is a great blow to us and will impact the life of all our close family, and especially my daughter.”

Last September, we saw the anti-White agenda on display again when a 14 year-old Ukrainian Orphan girl was being deported, despite her English adoptive parents begging not to send her back to her war-torn country.

You see, even though Britain may have a Conservative government, but they, like a Liberal or Labour government also want to “diversify” the country.

Whether left-wing or right-wing, those in the top parts of society are aiming to destroy White majority countries by mixing us with non-White people.

If this was done to any other group on the planet, Tibetans for example, it would be called genocide, and only an evil psychopath would support such an agenda.

However, we are living in a world where White genocide is not only acceptable but desirable, and to publicly oppose this agenda can get you in trouble with the law, in some countries.

Fortunately, it is perfectly legal to call them out and say “diversity” is just a code word for White genocide – they can’t take that from us.

This week in #WhiteGenocide 1

White children in Britain told to go to mixed schools

“Too many white people” in Pittsburgh says government official

This is Why We Say “White Genocide” Professor: a world without “Whiteness” (White people) will be “without...
Scroll to top