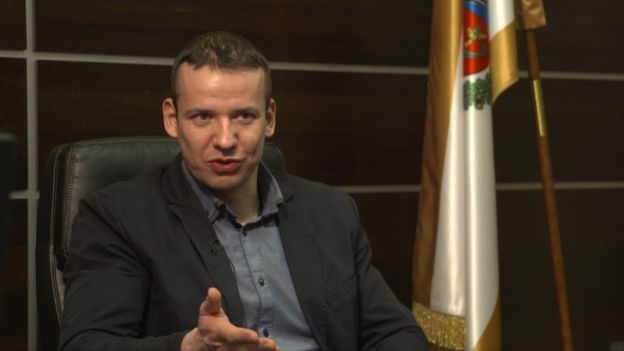 “We primarily welcome people from Western Europe – people who wouldn’t like to live in a multicultural society,” says Laszlo Toroczkai, mayor of the village of Asotthalom, in Hungary.

“We wouldn’t like to attract Muslims to the village. It’s very important for the village to preserve its traditions. If large numbers of Muslims arrived here, they would not be able to integrate into the Christian community.”

“We can see large Muslim communities in western Europe that haven’t been able to integrate – and we don’t want to have the same experience here,”

Mayor Toroczkai has put in place several laws to ensure that his village remains European, and has organized 24/7 border patrols to keep the town safe from African and Muslim illegal immigrants.

When the BBC asked if he was building a “White supremacist” village; he responded “I didn’t use the word white. But because we are a white, European, Christian population, we want to stay [like] this.”

“If we were black we’d want to stay a black village. But this is a fact and we want to preserve this fact.”

Japan just said it wouldn’t be taking refugees because it wants to look after its own people first. But no one screams “Arghhhhh! Evil supremacists!” at them.

Have you noticed that out of all the countries in the world, the only countries which have an obligation – a duty – to bring in third-world immigrants are full of White folks? Strange isn’t it.

But why? Well, if you don’t know by now, it’s because the West is infected with a dangerous anti-White ideology which literally states that Whites are evil and must be “abolished.” That’s why when the anti-Whites talk about “multiculturalism” or “diversity” they mean less White. We call it White genocide.

This week in #WhiteGenocide 7

This Week In #WhiteGenocide 8
Scroll to top